What are wind speed gauges?

Wind speed gauges are used to measure the wind speed in order for meteorologists to accurately predict weather patterns.

Wind speed gauges are used to measure wind speed, altitude, atmospheric pressure, temperature, humidity etc. A wind speed gauge is an instrument that measures the speed of moving air. These measurement parameters can be used in various applications including erecting wind turbines, building architectural structures to withstand high velocity winds and many more..

Now a days things are changing drastically. Even farmers use these machines to know the weather and predict their next move. So the wind speed measurement is also very important. Wind speed and its direction will allow us to monitor and predict weather patterns and global climate. For example, before Tsunami is one of the worse oceans waves hits shores. The winds from oceans and their speed will allow the scientists to measure the place and impact of the Tsunami. So the government of that country will be able to make necessary changes. So, every country builds its weather stations in order to predict and make decisions. Speed of wind is measured by using different gauges at the same time. The readings or values of wind pressure and wind speed are recorded and printed for future use. 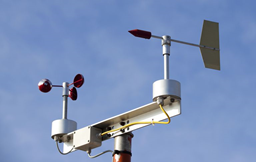 Mechanics of a wind gauge:

·  Wind direction is measured through a pointer in the gauge, arranged at an angle with counterweight.

· The pointer is attached to the metal rod and rotates freely.

·The velocity of the wind is measured by the wooden board or a metal plate. This will give us a hint of speed of air (miles per hour) or wind speed. The first mechanical anemometer to measure wind speed was introduced in 1406 by Leon Battista Alberti. With the passage of time, people started making different kinds of anemometers with better accuracy. In 1967 Robert Hookies’ wind disk was famous. He made a disk that is used to measure the energy and direction of the wind. After him, Johan Thomas Romney Robinson improved that design with four hemispherical cups and mechanical wheels. Three cup anemometer was invented in 1935 by Johan Patterson.

There are three ways to measure the wind speed as science is making progress:

All these devices are attached to data recording machines. One can now check past wind speed data and also access wind speed information from different regions. It is a wind meter used to measure the velocity and volumetric flow of wind. It’s a small handle device consisting of a turbine and a digital screen. A high-quality vane anemometer device has an accuracy of approximately ± 0.5m/s. A windmill is driven by the air stream and the rotation is transmitted through gearing to dials or other recording devices. These rotations in a shorter period are then calculated and the average gives the speed of air. Because the calculation of the speed of air is quite difficult. There are guts and lulls in the air. It is the oldest way to measure the energy or speed of the air. It was used first in the 1400s by Europeans. A simple protector, ball, and thread are used to make a ping-ball anemometer. You just need to take this out and let the ball fall measure the angle between the thread and protect. Draw the chart and calculate the speed of air.

It measures wind speed by detecting the difference in time taken for an ultrasonic impulse to travel in each direction between pairs of transducers caused by the movement of air. It works on the principle of sound waves traveling in the air. As the speed of air affects sound waves. Without moving parts the measurement of wind speed is immediate and precise. The Laser Doppler Anemometer is used to measure fluid dynamic measurement but recently it has also been used to measure the speed of light. By focusing the single laser beam at one point wind velocity could be measured by the Doppler. This mechanism works as the Doppler measure the dispersion of the laser beam from its focal point. This will allow us to know the speed of light. The above-mentioned anemometers have the following advantages individually:

·The cup anemometer is one of the most used instruments. It has a wide range of measurements, high strength, and corrosion resistance. It is very cheap. It has different types of anemometers.

·Windmill anemometer is easy to use and has wide arranged according to the design. It is also corrosion-free.

·Vane anemometer is smaller in size and easy to carry. It’s cheap as compared to others.

·There are no moving parts in the ultrasonic anemometer. It’s very sensitive and detects wind swiftly and accurately.

The above-mentioned anemometers have the following disadvantages individually:

·The only disadvantage of these instruments is that they are very expensive instruments and high winds or storms could easily distort them.

·In the case of a cup anemometer there only an experienced person can use it. There is no proper theoretical work for guidance.

·In the case of a propeller anemometer or windmill the blades are usually stuck, fuselage under cold weather, and cannot work properly. This causes a great disturbance in weather observation work.

·The measured speed range is small in the case of the vane anemometer, also it has no recording system. It needs batteries to work and batteries need replacement frequently.

·The installation of an ultrasonic anemometer is complicated and very expensive.

·In the case of laser doppler skilled person is needed to work with that. Special arrangement is also needed to set up things.

The above-mentioned sensors are used in different weather stations, airports, and large farms. But one can install its own gauge and measure the air pressure and speed in his own location. So, choose those sensors which you think are best suited to your location and budget.